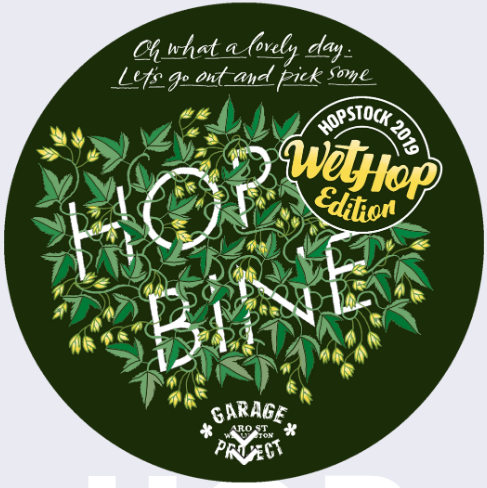 The latest release in our ongoing serious of foraged flower ferments. For this brew, freshly harvested whole bines were plunged into a light golden base wort, creating a spontaneous fermentation using only the yeast present on the hops. The beer was then allowed to age and develop for a year in oak barrels, before being infused with another dose of wet hops flown in straight from the harvest. The result of this brewery outing is a complex yet clean citrus-like sour, bursting with delightful fresh hop aroma.

The Garage Project is Pete Gillespie, Jos Ruffell, and Ian Gillespie.
When we started out we were tiny. Garage Project wasn't even micro brewing… it was a truly nano brewery.
After nine years of working in breweries with equipment 100 times bigger it was quite a change to downsize to a fifty litre brew kit. But what we lacked in size we more than made up for in agility and the ability to experiment.
When you’re brewing on such a small scale you can afford to take risks. That suited us. We wanted to try something new.
Five years have passed and we’ve grown, but that same ethos still shapes how we do things at the Garage. Whether we’re brewing 50 litres or 2000, we’re still here to take some risks, to have a bit of fun and to try something new.
Way back in the day, when we were just starting out, we wrote a little blurb about each other to shed some light on who we are, and what lead us down the path of starting a brewery in Wellington, (if you’ve ever written your own bio, you’ll know how hard it can be!).