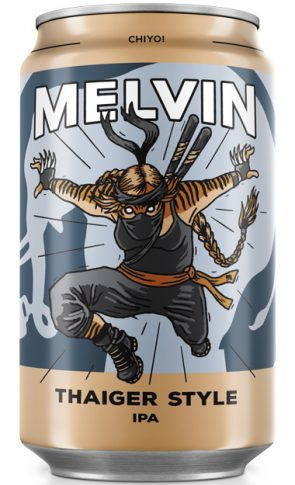 All the aroma and flavor you want from an IPA, but less ABV so you can stay on point like a tiger. A light copper malt base lays the foundation for layers of hop resin, trail mix, stone fruit, and blonde tobacco. Dry hopped with Citra, Mosaic and Simcoe.

This is the beginning of your wonderful new, Kung Fu friendship between our brew family and all beer lovers alike. Talk of Melvin began on the California West coast — but the heart of Melvin started beating in the small mountain town of Jackson Hole, Wyoming.

With big ideas and even bigger barrels of hops, Melvin now takes off in the hands of Co-Founder/Field Hoperative — Jeremy Tofte, Co-Founder/Head Donkey — Kirk McHale, and Head Production Brewer — Dave Chichura. Let’s get to it. Thai Me Up Restaurant, the original home of Melvin Brewing, was already known for its world class beer. Melvin is now expanding from a 3bbl to a 30bbl system after winning two medals at the World Beer Cup earlier this year: A gold in the Imperial Indian Pale Ale category for its 2x4 and a bronze in the fruit beer category for its Chchchch-Cherry Bomb.